Introduction
Hope: Eight Reasons for Optimism about the Future of Education

“Most policymakers—and many school administrators—have absolutely no idea what kind of instruction is required to produce students who can think critically and creatively, communicate effectively, and collaborate versus merely score well on a test. They are also clueless about what kind of teaching best motivates this generation to learn . . . We need more profiles of quality instruction…to inform the education debate.”

—Tony Wagner, Creating Innovators: The Making of Young People Who Will Change the World 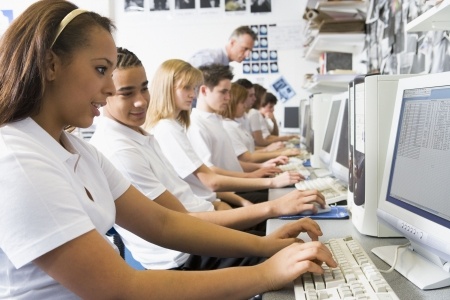 Static Schools in a Changing World

In his classic 1968 study of daily life in classrooms, Philip W. Jackson wrote that students spend as much as 50 percent of their time waiting for something to happen.

They wait for teachers to pass out papers. They wait for slower students to get their questions answered. They wait for the lunch bell to ring. Alas, 45 years after Jackson first published his book, millions of American students are still waiting. They’re waiting for all of the old reasons, and one relatively new one: today, they’re also waiting for our education system to catch up with their lives.

While much of society has changed radically in the 21st Century, the vast majority of the U.S. public school system—encompassing approximately 133,000 individual schools—still clings to early 20th Century practices. Teachers lecture while standing in front of rows of desks; students take notes with pencils and lug heavy books, and both groups expect students to memorize content more often than to learn or practice new skills. In general, students are trained to act as followers, not leaders. It’s almost as if the Information Age—and the attendant changes to the world that came with it—had never happened. Until, of course, it’s time to venture beyond school walls. At that point, far too many of them find out they’re unprepared.

Time for a Change

Throughout the United States, several million middle and high-school students are caught in the disconnect of living in a 21st Century world while attending 20th Century secondary schools. These “digital natives” have grown up in a time when communication is instant, memory is outsourced, and job security is a story told by old fogeys—and yet their schools remain focused on preparing them for futures more relevant to days gone by. As the Harvard-based thought leader Tony Wagner warns, today’s world doesn’t just care about what you know, but what you do with what you know.

That new world, in other words, is demanding that Information Age workers have Information Age skills, including the abilities to think critically, collaborate, and work independently. To date, however, relatively few U.S. secondary schools are designed with these skills in mind.

Wagner and other education experts argue that fixing this problem will require a wholesale transformation of secondary education as we know it. Today’s students need much less passive rule-following and rote memorization, and much more guidance and support in becoming self-directed learners who are able to take initiative and apply what they learn to a variety of different situations. Above all, they need better preparation to be engaged citizens who survive and thrive in both college and in their careers.

As this vision of change has gained clarity and adherents, several names for the shared goals have emerged. Some speak of “college and career readiness.” Others refer to “21st Century skills.” Still others have adopted phrases including “cognitive and non-cognitive skills,” “linked learning,” and “higher-order thinking.”

The expression we like best is a simple one: Deeper Learning. We chose it not only for its simplicity, but because it fully encompasses the educational goals that, taken together, constitute the foundation for developing the single most important ability students should possess: the capacity for learning how to learn. In an ever-changing world—one in which knowledge and its applications have the potential to shift almost daily—nothing is more valuable.

While all of these are vital components of Deeper Learning, we cannot emphasize enough the importance of the final element on this list: self-direction. Students who are empowered to be the leaders of their own educational lives are capable of embodying a desire to learn unmatched by any that could be instilled by a parent or teacher.

In the early ‘80s, on the heels of the flare sent up by “A Nation at Risk,” Theodore R. Sizer published his seminal treatise on high school in America, Horace’s Compromise. Yet much of the wisdom set forth by his work about how to transform the experience of secondary school failed to take center stage amid the urgent cries and ensuing wave of responses unleashed by the aforementioned infamous report. In terms of reform, the time has come for the long view—a marriage, of sorts, between Sizer’s vision and the latest efforts to respond to our expanding educational crises.

By now, you may already have guessed at our choice for that solution. In two words, it’s Deeper Learning. Because we want high schools, parents, and policymakers to better understand the breadth of what that actually means and looks like, and because we agree with Wagner and other education innovators that all of us need better and more ideas of what quality teaching and learning looks like, the two of us set out, beginning in 2011, to find and describe a sample of secondary schools that exemplify Deeper Learning principles, in the hopes that our book—this book—will ramp up efforts to implement these ideas and principles, and help provide a bridge to the future.

What all of our schools have in common is that they are re-imagining how teachers teach and students learn. In each of them, teachers collaborate far more than the norm, supporting each other and jointly taking responsibility for the students’ success. In each, as well, the bottom-line goal is to help students become more engaged in and responsible for their own learning.Their formulas appear to be working, as they have achieved both higher graduation rates and percentages of college admissions than the average rates for the districts and states in which they are located.

We’re convinced that the eight schools we profile on the pages to come are showcases of ways to prepare students for today’s world, by creating engaged, collaborative, creative, and self-directed critical thinkers. As we discovered on our visits, they meet this goal with a set of common of strategies listed here and examined more fully in the chapters to come.

All of the schools:

In the following pages, you’ll hear directly from the teachers that work to make it all possible. In Portland, Maine, Gus Goodwin gives eighth graders at King Middle School a visceral understanding

of electricity, as they design and build small wind turbines, while national award-winning English teacher Susan McCray uses what she learned leading wilderness adventure trips to immerse Casco Bay High School students in the lives of homeless residents of

Appalachia. At Rochester High in Indiana, science teacher Amy Blackburn inspires ninth-graders to brainstorm ways to improve efficiency at the local hospital’s emergency room—and present their ideas to the hospital nurses. And in Cleveland, Ohio, Brian McCalla, who surrendered a globe-trotting job to teach, infects students at MC2 High School with his zeal for industrial design. These talented, passionate professionals thrive in cultures that give them unusual autonomy, logistical support, and opportunities for collaboration, and the fruit of their labors is evident.

As Chris Lehmann, principal of Science Leadership Academy, describes it, schools like his strive to help students become “the best versions of themselves.” During our visits, we repeatedly found evidence of how well they are succeeding.

You’ll also hear about students including Andrea Lane, a math whiz who was bored and distracted in middle school, but who flourished at MC2 in Cleveland after discovering a love of engineering.

Holly Marsh got “hooked” on her career path by studying ecology at the Avalon School in St. Paul, going on to spend more than 300 hours volunteering at a national park, where she was hired as a park ranger the day before her sixteenth birthday. Jason Ehringhaus was a shy, average student at Casco Bay High School, in Portland, Maine, before his teachers egged him on to follow his curiosity about Asia, a path that led him to live and study in Japan and China.

What can’t be discounted is that in each case, the remarkable schools we profile in this book have helped young men and women not only to acquire learning skills they can use throughout their lives, but to tap the connections that have changed education from being a duty to a passion. “I fell in love with a place that I first hated with my heart and soul,” Casco Bay High School graduating senior Abde Ahmed told his classmates and teachers at an end-of-year ceremony. A Sudanese immigrant, Ahmed had evolved from a skeptical sophomore to a gung-ho junior and senior, according to his teachers. As he explained that metamorphosis to his fellow students and teachers: “I fell in love because of you. Because of all of you.” Schools in all sorts of communities throughout the country can and should transform into similarly inspiring centers of learning.[/vc_column_text][/vc_column][/vc_row]

“The best book on education I have read in the year 2014. Really great look into what makes deeper learning possible for schools. Great examples with many that could be applied to any school. I will be sharing this with every educator that I know.”

This book offers a clear introduction to DL ideas and methods and the motivation behind them. It is a fast read and will interest educators who want to produce self-motivated, passionate learners with a goal that looks beyond passing tomorrow’s quiz.

“Our job is to make our students the best versions of themselves.”

“…a rare blend of inspiration and practical action.”

“Deeper Learning is a wonderful book that should be read by every educator, parent, and policymaker.”